After abortion, Ireland gets ready for euthanasia

Media and intellectuals have started a campaign in Ireland to introduce "assisted dying", as "necessary". It’s a case of déjà vu. And the Church immediately becomes a target, due the value it gives to suffering and its network of hospices that house the dying. 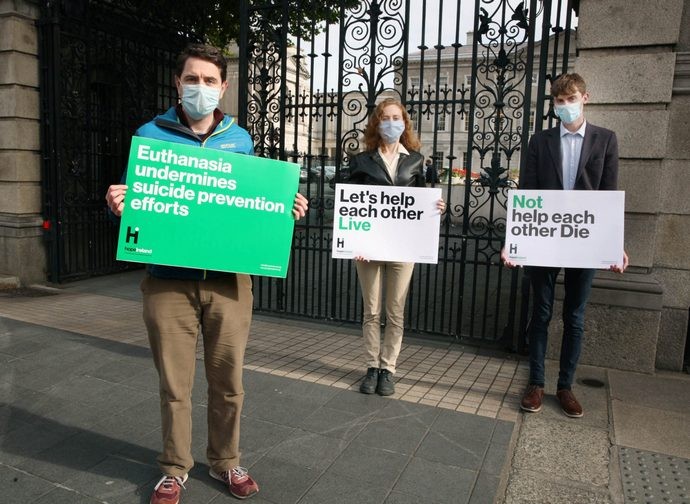 As it did with abortion, the Irish media and some politicians are preparing the Irish people for a push to legalise euthanasia or ‘assisted suicide’. Before abortion was legalised in Ireland, there was a clear and obvious media move to emphasise ‘hard cases’ that would prove the cruelty of our pro-life constitution.

The tragic death of Savita Halappanavar from sepsis that was not diagnosed due to medical negligence, galvanised pro-choice activists. They said that it was because Ms Halappanavar was not allowed an abortion that she died. Her’s became the case used to illustrate the pro-choice side of the argument and it was and is a powerful and emotive story.
Given the ultimate result of the abortion referendum – 64% voted in favour of abortion – it is unlikely that this case did much more than seal the deal for a small percentage of the population. But it ensured control of the narrative around abortion. It created an image that abortion was necessary for these hard cases, when in fact they make up less than 1% of abortions taking place in Ireland.

For euthanasia, this deliberate attempt to control the narrative is more necessary, as consensus on the issue is perhaps less than it was on abortion, although not by much. If you were to put it to a vote tomorrow, it is likely the Irish people would support introducing euthanasia. But particularly among health care and palliative care professionals, as well as psychiatrists, opposition to euthanasia is quite high. When an assisted suicide bill was launched in the Dáil (one of the houses of parliament), hundreds spoke out against it.

But once again, the consensus among the Irish intelligentsia – largely the Irish media – is that euthanasia is necessary. Most explicitly, The Sunday Times launched a campaign at the end of November for the legalisation of “assisted dying” in Ireland. The manner in which they introduced their campaign is enlightening:

“We appreciate that this is a difficult and delicate issue, with a small group of campaigners in favour of it becoming legal and an equally determined group resisting any change. We feel there is a large middle ground that is broadly in favour but has genuine and understandable concerns. Everybody must surely agree, however, that this is an appropriate time to debate the issue, as assisted dying is now legal in about a dozen countries, and more are set to join them.”

Their language is quite similar to one of Ireland’s premiere daily newspapers, The Irish Independent, who ran two comment pieces on the topic. The first called for open debate on the issue, while presenting a number of tragic cases that tilted the narrative in favour of assisted suicide (or assisted dying as it’s also called), and pointed out that there is broad public support for it. And the second, from a pro-assisted suicide activist, said that those who oppose euthanasia on ‘slippery slope’ grounds have a point, and so rigorous safeguards should be put in place when assisted suicide is introduced.

What these set up is the idea that there are campaigners for and campaigners against, both acting with good will and based on heartfelt moral beliefs. But that is not true. As I have already pointed out, those who deal closely with the dying and the sick oppose it. These are not ‘campaigners’ – they are doctors, nurses and hospice carers. They know that introducing assisted suicide, whatever the safeguards, will lead to its normalisation. Further, that it will turn doctors from caregivers into lifetakers, making death a part of their treatments.

“Once permitted in a jurisdiction, experience has shown that more and more people die from assisted dying,” according to co-author of a paper from the College of Psychiatrists of Ireland Dr Siobhan MacHale. “This is usually the result of progressively broadening criteria through legal challenges because, if a right to assisted dying is conceded, there is no logical reason to restrict this to those with a terminal illness.”

‘No logical reason.’ This is the crucial point. The papers and articles I reference recognise that the main opposition to assisted suicide comes from two points of view, one Christian, the other medical ethics. But ethics relies on a sound culture to undergird it, and a body of theory to defend it. Both of these were provided by the Church, and it is exactly why the Church will be brought into the debate.

In Ireland, the Church stands for all things evil that happened in Ireland: oppression, mistreatment of women, bans on abortion, divorce and homosexuality. As Ireland seeks to separate itself from this past, it will see euthanasia as another opportunity to do so. The fact is that the Church is still one of the few places providing unconditional love for the sick and the dying. Most of the hospice houses in Ireland were founded by Christian orders, and they are not about to undo their hard work in offering a place of welcome to the dying.

But once shorn of the Christian context, where love of suffering and love for the suffering go hand in hand, it is not obvious why safeguards should be introduced at all. Why should we let those who are suffering live, when only a life that is free from suffering is happy? One of the characteristic qualities of this age, as predicted by Aldous Huxley in A Brave New World, is the desire to disavow our freedom to suffer, to banish suffering from the public scene. Introducing euthanasia will put Ireland one step closer to Huxley’s dystopian vision.