We all have felt moved by the harrowing scenes at Kabul international airport where thousands of people have tried in vain to leave their country now in the hands of the Taliban. In the world of politics, once again, welcoming refugees and calling for impossible airlifts for millions of people is being urged. 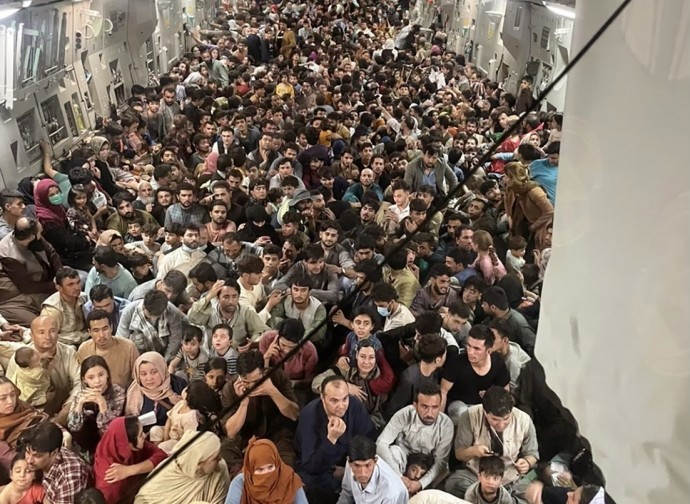 We have all been moved by the harrowing scenes at Kabul international airport where currently there are thousands of people attempting in vain to board planes to escape their country now in the hands of the Taliban. There have been many expressions of sincere solidarity and compassion. Many, however, take advantage of this to claim that the West is obliged to welcome them, as if the West had ever failed in its commitments to refugees. Others fear repeating 2014, the year in which hundreds of thousands of Syrians and Iraqis fled the territories of their countries conquered by Isis and proclaimed a Caliphate.

Absolutely no one seems to realise that the human drama happening now and in the days to come is not that of the Afghans who are now safe, those who have escaped by the thousands from Kabul and those, hopefully many more, who have reached and crossed the border with Pakistan or other neighbouring states by land. Rather it is about those - virtually all of them - who have not been able to leave Afghanistan. It is they, if not unable to flee, who will remain at the mercy of the Taliban. "The situation is terrible for our people," Farhad Bitani, son of a high-ranking mujaheddin member and author of the autobiographical book The Last White Sheet, told Tempi magazine. "At least in 1996, Afghans were able to escape, but now everything is blocked. Everything has happened in a few days, and no one can escape, since the borders are closed.”

No one seems to understands this. They seem, rather, convinced that the Taliban will agree to an airlift, to the opening of 'humanitarian channels' to allow for hundreds of thousands, indeed millions, of people to leave Afghanistan.

For example, "Together for Afghanistan", is one online appeal to collect signatures to ask Italian Prime Minister Mario Draghi for "the immediate evacuation from Afghanistan to Italy without exclusions, immediately welcoming all those fleeing the Taliban: individual women or women with children, LGBT persons, elderly people without any social safety net, human rights activists, journalists, teachers, students, health and social workers and even those who have worked in humanitarian and development programmes with international organisations." The promoters of the Together for Afghanistan initiative say that "now is the time to save lives, with a direct, rapid and large-scale humanitarian relief operation for people at risk in Afghanistan. It is time for solidarity. The mantra is "airlifts without exclusions."

The National Conference of Democratic Women wants "Italy and Europe to commit immediately to a policy of humanitarian passages for refugees from Afghanistan. After withdrawing their NATO troops, Europe and the West have a duty to immediately welcome those fleeing the Taliban."

Isa Maggi, national president of  States General of Women, has urged the United Nations to intervene militarily in Afghanistan to protect women from the Taliban: "The [UN] blue helmets should become pink helmets", she said. "We need physical action to protect Afghan women who are now at risk. The first thing I expect is an action, a real intervention to defend young women against the Taliban, who are now everywhere.

But the Taliban, in order to accept that millions of people will leave the country and find asylum abroad (including students, teachers, young girls, the elderly) or to admit the presence of UN troops to protect young Afghan women, must acknowledge that those who live in Afghanistan and governed by them in strict compliance with Koranic Sharia law, will be indeed be in danger. They must admit they will be treated unfairly, be deprived of their personal rights, and  even threatened with loss of freedom and life, if they do not scrupulously follow Islamic rules.

On the contrary, during their first press conference on the contrary, the Taliban stated no one should be afraid of them. They said not even those who have worked with foreign forces should fear their revenge and retaliation and that women will be able to continue to study and work as long as they respect the rules of the Sharia law. "Our women are Muslims and will, thus, be happy to live according to the rules of the Sharia," said Taliban spokesman, Zabihullah Mujahid, when responding to a question.

"After 20 years of struggle, we have liberated Afghanistan and expelled the foreigners," Mujahid said after reciting some verses from the Koran, "This is a moment of pride for the entire nation. The "expelled foreigners," however, do not believe his reassuring words and continue to help their collaborators flee Afghanistan. On 18 August, by way of operation Aquila Omnia, seven planes provided airlifts. The first plane landed in Italy at Rome Fiumicino with 85 Afghans on board, followed by another two planes with 150 people aboard. All were former Afghan collaborators together with their families. Other countries are doing the same. The United States, for example, is taking 2,000 Afghans to Uganda. They will stay in one of the country's refugee camps and all the costs will be taken care of by Washington.

As for the Afghans who have managed and will soon leave the country by their own means, if they ask for asylum they will obtain it in accordance with the Geneva Convention and international law. In terms of their own interests, it would be better for them to gain refugee status in countries that are similar in religion and culture, as happened in the case of Syrian and Iraqi refugees.