The greatest risk to religious freedom in Ukraine is faced above all by the communities in the republics of Lugansk and Donetsk, recently recognised by the Russian Federation. In Crimea, before the Russian occupation, there were 50 religious organisations operating on the peninsula, while by 2019 their number had already dropped to nine. The Daily Compass interviews Alessandro Monteduro, director of the Italian section of Aid to the Church in Need (ACN) 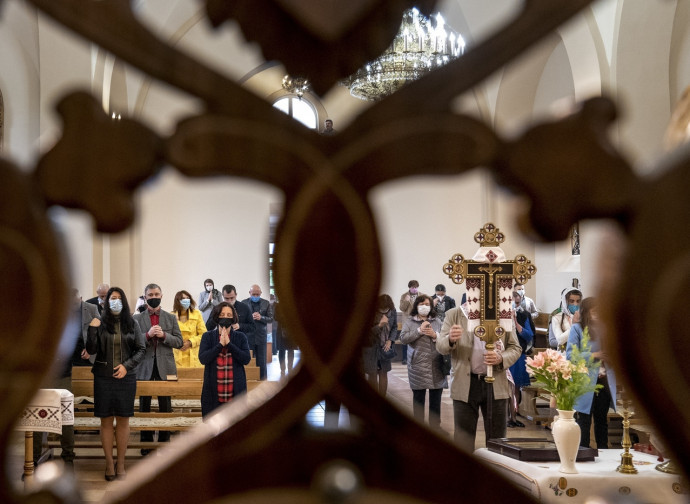 The greatest risk for religious freedom in Ukraine is faced by the communities in the republics of Lugansk and Donetsk, recently recognised by the Russian Federation. In Crimea, before the Russian occupation, there were 50 religious organisations operating on the peninsula, but by 2019 their number had already dropped to nine. The Daily Compass has discussed this with Alessandro Monteduro, director of the Italian section of ACS. The pontifical foundation has just committed € 1 million to the emergency.

Dr Monteduro, what kind of aid is Aid to the Church in Need providing to Ukraine?
Aid to the Church in Need has been present in Ukraine since 1963, and since then has been supporting Christian communities of the various rites, with particular emphasis on the Catholic Church, of course. We have a network in all the dioceses, including those in eastern Ukraine. In Ukraine, there are 4879 priests and religious and 1350 women religious. In this sense, we have already acted since last Friday, allocating € 1 million as a first intervention for the Ukrainian churches. In the past, we had already contributed several tens of millions of euro to support the training of seminarians. In the last ten years, aspirants to the priesthood have received € 6.5 million from Aid to the Church in Need. Since 1994, we have supported the construction and maintenance of Latin and Greek Catholic seminaries with more than € 9 million, followed by € 15.6 million for the construction and restoration of monasteries and convents. We hope to continue this work, also thanks to the generosity of benefactors, who are doing their best in these days from Italy and beyond.

Based on the information you are receiving, what are the Ukrainian Churches most in need of?
The scenario is very varied. There are areas of the country where, thank God, the conflict has not yet arrived, and I am referring to the borders with the European Union (Moldova, Romania and Poland). The situation is different in other central-eastern cities, starting from the capital, where we are witnessing a splendid work of generosity and brotherhood, with numerous places of prayer and training - churches, seminaries, convents - that have opened their doors to those seeking refuge, in the hope of remaining free zones that cannot be attacked.
Turned to your question, I’ve just spoken to the director of a seminary in Horodok, 180 kilometres from Romania, who told me. "We don't need much at the moment", meaning that they still have stocks available. Other religious communities had not prepared and are now beginning to need basic necessities. The same applies to those living in curfew areas. Even before material support, however, all the communities are asking for spiritual support and community prayer for the future of the country. They deeply feel the extraordinary closeness and solidarity of the Christian and Catholic communities from Europe and they benefit from it. They send us their thanks and, together with us, pray that this situation may end as soon as possible.

Where is the situation most dramatic?
Probably in Kharkiv, where the streets are deserted and people are hiding in basements, bunkers, and garages. The Latin-rite bishop of Kharkiv, Zaporižžja, himself has spent the last few days in a bunker with several families, as has his Orthodox counterpart.

What impact has the crisis that has dragged on since 2014 had on Catholic-Orthodox ecumenical relations?
The last eight years have certainly been difficult. Since 2014, problems related to faith communities that do not belong to the patriarchate of Moscow have become all too evident. I am talking about Catholic and Pentecostal communities, but also Jehovah's Witnesses. In particular, in the area of the two self-proclaimed republics recognised a few days ago by the Russian Federation, religious freedom itself has been seriously jeopardised in recent years. The bureaucratic impact (i.e. the entire system of registrations and authorisations) has meant that religious communities have been reduced to a few units. Before 2014, there were more than 50 in Crimea, today there are only nine.
In these eight years, in the eastern part of Ukraine, it has come to the point of preventing aggregations for reasons of faith. Religious organisations that were not registered on 15 October 2018 have in fact become the target of retaliation. In 2019, for example, gas supplies were cut off to unregistered buildings where religious services were being held, with the threat of further cuts to water and electricity supplies to limit access. Many testimonies that have reached us over the years confirm that religious freedom has suffered greatly. Even when there was a sort of liaison with the Russian Federation, we never ceased to point out that the faith communities that did not recognise themselves in the Orthodox Patriarchate of Moscow, in reality, suffered much more than mere discrimination.