Academy for Life: ethics at odds with Catholic morality

The PAL's Basic Text is incompatible with St John Paul II's 1993 encyclical Veritatis Splendor. The new course of the Pontifical Academy for Life denies the claim that there are actions that can never become good. Infringing these moral absolutes leads to overturning the Church's entire teaching on sin, on merit, on the reality of Hell, on the meaning of Creation and the redemptive Incarnation. And also on martyrdom, the meaning of which disappears. Reflections at the Conclusion of the Conference A Response to the Pontifical Academy for Life. 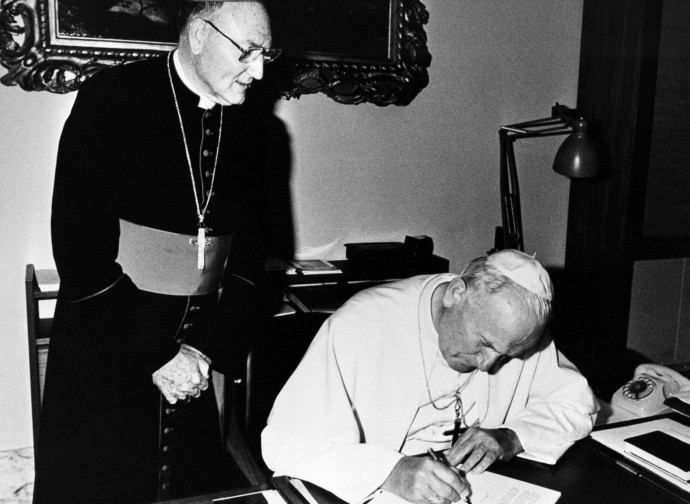 The Basic Text, outline for the study seminar (30 October - 1 November 2021) promoted by the Pontifical Academy for Life, recently published in the volume Theological Ethics of Life, is to all intents and purposes a reversal of Veritatis Splendor. This is the clearest evidence that emerged during the three-day conference A Response to the Pontifical Academy for Life's Publication: The Theological Ethics of Life. Scripture, Tradition, and Practical Challenges (for a summary of the days, see here, here and here), which saw, among others, the participation of Mgr Livio Melina, Dean of the John Paul II Institute for ten years, and Father José Granados, currently Professor of Theology of the Sacrament of Marriage at the same institute.

"I cannot forget that Franz Böckle - then among the leading German-speaking moral theologians, [...], in view of the possible decisions of Veritatis Splendor (VS), declared that if the Encyclical decided that there are actions that must always and under all circumstances be considered evil, he would have raised his voice against it with all the strength he had. The good Lord spared him the need to do so. Böckle died on 8 July 1991. The Encyclical was published on 6 August 1993 and actually contained the statement that there are actions that can never become good”. Thus Benedict XVI had expressed himself in the famous 'notes' published in 2019 in Klerusblatt. John Paul II's encyclical had really been published with the specific intention of armouring the affirmation of moral absolutes in the face of arguments that were increasingly finding space in academic moral theology; positions that wanted to emphasise the presence of circumstances and situations that could lead to exceptions to the general moral rule (VS, 56). The encyclical had them in mind, just as it had in mind the "so-called 'pastoral' solutions", the "‘creator hermeneutics", an idea of the fundamental option dissociated from individual concrete choices (VS, 65), "false solutions, linked in particular to an inadequate understanding of the object of moral action" (VS, 75), of a proportionalist and consequentialist stamp. Veritatis Splendor had them in mind and explicitly condemned them.

The Conference has highlighted this irresolvable incompatibility between the Basic Text and the 1993 encyclical, between the anthropology underlying the theses of the former and that carried forward by the encyclical. It cannot be passed over in silence that VS expressed the teaching of the Church's Magisterium both positively and 'negatively', with the explicit condemnation of certain errors; nor should it escape notice that the encyclical itself considers "the question of the morality of human acts" and, in particular, the "existence of intrinsically evil acts" as decisive aspects, because in them "the very question of man, of his truth and of the moral consequences deriving from it are concentrated in a certain sense" (VS, 83).

Moreover, the particular desire of John Paul II to call pastors, theologians, and the faithful to sentire cum Ecclesia on the issues dealt with in the Encyclical cannot be left in the shadows, when he wished to emphasise that he had given this teaching by referring to the authority conferred on the Pope to confirm his brethren: "Each one of us knows the importance of the doctrine which represents the nucleus of the teaching of this Encyclical and which is recalled today with the authority of the Successor of Peter. Each one of us can perceive the gravity of what is at stake, not only for individual persons but also for society as a whole, with the reaffirmation of the universality and immutability of the moral commandments, and in particular of those that always and without exception prohibit intrinsically evil acts".

Now, let us consider this seriously: approving the "new" elements of the Basic Text (BT), supporting the so-called "new paradigm" means first of all discrediting the Church itself in its Magisterium; it means thinking that the Church has constantly taught and reaffirmed with the authority of the successor of Peter a doctrine, which concerns "the very question of man", in order to recall again the encyclical, which was instead wrong. For there is no development - despite continued protestations to the contrary - between a document that maintains that the moral specification of an act does not depend on the intentionality of that act and an encyclical that instead rejects the thesis of those who hold that "it is impossible to qualify as morally evil according to its species - its 'object' - the deliberate choice of certain determined conduct or acts regardless of the intention for which the choice is made or the totality of the foreseeable consequences of that act for all the persons concerned" (VS, 79).

The point on which the BT overturns VS is not only central to the encyclical, it is central to the vision of man, to the Church's teaching on man. It was amply emphasised during the Conference that the affirmation of the moral qualification of an act according to its species ultimately entails the recognition of biblical anthropology and the rejection of a gnostic anthropology. It entails the recognition that our bodies are created and therefore have their own language; therefore, acts that conflict with this language of theirs can never be ordered to the good of the person: that is why they are always intrinsically bad. This is the ultimate boundary that can never be crossed, because crossing it would mean the evil for the person who performs it: our acts, which we perform in our body, change ourselves, mould a moral identity in us. On this depends all the Church's teaching on sin, on merit, on the reality of Hell, on the meaning of Creation and of the redemptive Incarnation. The meaning of martyrdom also depends on this: if there are no acts that are always bad, if 'external' acts do not morally characterise the person who performs them, then why martyrdom?

This is why Benedict XVI, in those 'notes' that caused a considerable headache for many, linked the idea of martyrdom to moral absolutes: “There are values that it is never licit to sacrifice in the name of an even higher value and that are above even the preservation of physical life. God is more than even physical survival. A life that is bought at the price of denying God, a life based on an ultimate lie, is a non-life. Martyrdom is a fundamental category of Christian existence. That it is after all, in the theory supported by Böckle and many others, no longer morally necessary, shows that the very essence of Christianity is at stake here”.