The findings of the Commission on sexual abuse in the French Church are serious, but the suspicion is the Church is being blackmailed: the high number of abuses is derived from estimates; the intervention of the frequenter of the Grand Lodge, Sauvé, who chaired the Commission on viri probati, is suspect because it omits the main cause: homosexuality. There is a risk that Confession will be affected. 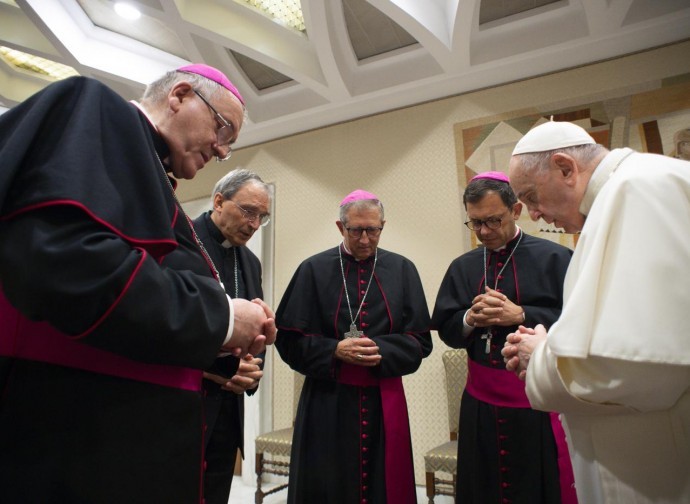 The watchword is reason, not to indulge in scandalmongering but neither to downplay it. The results of the independent Commission on sexual abuse in the French Church are certainly serious, but the news does not seem to reflect the truth. On the contrary, the suspicion is that scandalmongering is encouraged in order to avoid seriously tackling the scourge, and to humiliate the Church, thus blackmailing it into accepting whatever "solution" comes from the secularist consensus.

First and foremost, the 216,000 cases and the 2900-3200 predator priests are not actual data, but estimates and projections. Even if it’s probable, it’s still not been verified. It is not even clear which precise crimes the perpetrators are guilty of. Moreover, they represent about 4% of the total cases of abuse. Without doubt, this is still too much, but we don’t want those who over look the other 96% of the cases to be the ones to lecture us.

Moreover, the report makes it extremely clear that the vast majority of abusive priests have declared themselves to be homosexual or bisexual; this detail is confirmed by the fact that about 80% of the victims are male. To continue covering this up is no longer an option: homosexuality in the clergy is the greatest risk factor for child abuse. For this reason, a certain indulgence in such "sexual orientation", at least within the seminaries and the presbyterate, must no longer be permitted. If this scourge is really to be tackled, the network of cover-ups of homosexual priests and seminarians must be destroyed, like the cover- up that made the case in the Cleveland diocese possible (see here). Father Robert McWilliam, 41, was ordained in 2017 and arrested in December 2019, two years after ordination, for sexual exploitation of a minor and pornography involving children. The priest was also a frequent visitor to a homosexual, bisexual, and transgender social network. Apparently, during his six years of seminary, no-one noticed anything which is rather strange.

And yet, keeping a watchful eye on the scourge of homosexuality in the Church is not on the list of advice given by the President of the Commission, the Vice-President of the Council of State Jean-Marc Sauvé, who is also a frequent visitor to the Grand Lodge (see here). Instead, he does not hesitate to become the secularist coryphaeus of the very worst of the Synod on Amazonia. Why should the option of viri probati be a solution to the problem of child abuse among the clergy? But, considering that priests and religious account for about 4% of the total cases, and since much of the abuse occurs within family contexts, why should married priests be a solution?  The way out proposed by Sauvé, besides not taking into account the sacramental reality of the Church - and the fault is only partly his, since it was the French Episcopal Conference that gave him carte blanche - does not even take into account the fact that the celibate choice affects only a small percentage of the total cases of abuse.

Even more serious is the other interference of Sauvé, who does not hesitate to trample on an extremely delicate and indispensable point of the sacramental life of the Church: the seal of confession, with the consequence of the obligation of secrecy. "This secret, which admits of no exceptions, is called the 'sacramental seal', since what the penitent has manifested to the priest remains 'sealed' by the sacrament" (Catechism of the Catholic Church, 1467). The seal is considered by the Fourth Lateran Council to be of divine right; St Thomas explains the reason: the priest acts as a minister of God and is therefore obliged to do as God Himself does, who does not reveal the sin confessed. Sauvé's demand for a balance between the private good of the penitent and the good of the community does not take into account a much greater reality, namely the bonum sacramenti.

It is by virtue of the essence of the sacrament of penance that the seal can never be broken, without exception, whatever the pressure of civil authority. Sauvé also lacks common sense: if the French Episcopal Conference, in a mad frenzy, were to illegitimately relieve priests of the sacramental seal, would anyone still go to confession, especially to confess certain sins that are also civil and criminal offences?

It is therefore clear that Sauvé's advice is specious: it does not solve one iota of the problem, while at the same time attempts to push for internal reforms of the Church that undermine its sacramental structure. There is a need to be much more careful about entrusting such delicate matters to such characters, to say the least.