A woman and a cardinal try to save Catholics in China

At long last someone has decoded what the Chinese woman shouted to the Pope in St. Peter's Square, before being slapped. It was a heartfelt appeal to rethink the Holy See's policy of reconciliation with Beijing, which is sacrificing hundreds of thousands of Chinese Catholics. A gesture that pairs with Cardinal Zen's letter to his confreres. Signs of an intolerable situation that requires our solidarity. 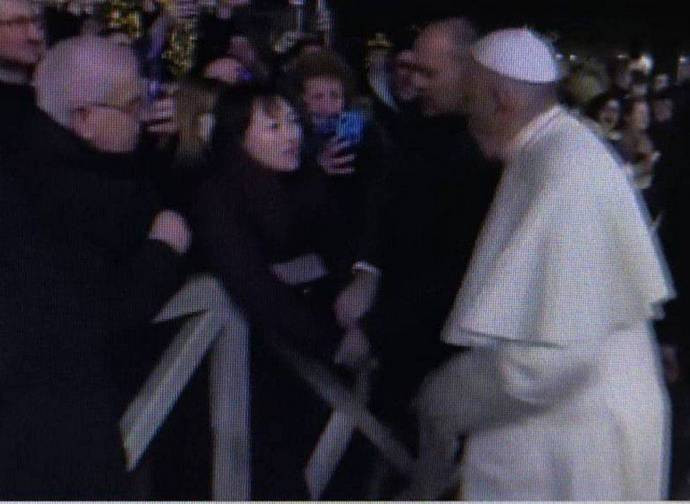 At long last someone has decoded what the Chinese woman shouted to the Pope in St. Peter's Square last December 31, before being slapped by Pope Francis, who wanted to get away. Moreover, solving the mystery significantly changes the scenario. An American living in Taiwan, Eric Mader, was the person who spent considerable time working on the film, with the help of some Chinese friends. The result - the phrase decoded with all the necessary explanations - is published on his blog, Clay Testament. So what did the Chinese woman say? "Why destroy their faith? Why destroy the Chinese? [Look for] the Chinese [feelings]. [Talk] to me! »(In brackets the words with a small margin of uncertainty). The reference clearly refers to the situation of Catholics in China after the signing of the secret agreement between the government of Beijing and the Holy See.

What difference does the scenario make? Because it is now evident, that it was not a rude gesture by one of the faithful who sought a handshake with the Pope as a trophy for their visit to Rome. It was rather the desperate cry of the Chinese Catholics persecuted by the regime and abandoned by the Holy See in this policy of reconciliation with Beijing, which every day increasingly turns out to be more an unconditional surrender to communist power. It was no coincidence that the woman made the sign of the cross shortly before the Pope came within range: she sought courage and protection from above for that extreme gesture, yelling at the pope that heartfelt appeal to listen to the voice of a persecuted Church.

So strong was the feeling she had inside that when she saw the Pope turn to go to the opposite side, by reflex she took his arm forcefully to pull him back and keep so he could listen to her words. Words that the Pope will certainly not have understood, but who knows if - in an attempt to free himself - he at least became aware of the pain and passion from which that gesture and those words were born. Certainly, he will not have been helped by his collaborators and by the many court Vaticanists who competed to insult the poor Chinese woman and reroute everything as a rude gesture and a lack of respect for the Pope. Curiously, no colleague on the spot tried to track down the Chinese woman and ask the reason for her gesture; better not to dig too deep, you never know what could emerge. What’s more, even the Pope's subsequent apologies were for the gesture itself, a stain on the image of the Pope, they were not addressed personally to the woman he slapped.

In any case, the Chinese woman’s gesture goes hand in hand with the letter that Cardinal Joseph Zen Ke-kiun wrote to his confreres of the Sacred College last September and that was made known just very recently. An appeal not to remain insensitive in the face of what is happening to Chinese Catholics, victim first of the aforementioned agreement and then of the pastoral guidelines that further aggravate the situation. Even Zen’s gesture appears extreme, that of a shepherd who sees his flock being killed and to be precise with the active complicity of who should protect it.

The archbishop emeritus of Hong Kong tried every possible means to be heard in the Vatican, he wrote three detailed letters to the Pope, he came personally to Rome to put them in his hand in the absence of being able to trust any mediators, he tried to put pressure on the Secretariat of State, made appeals publicly denouncing the ignoble policy of the Vatican Secretariat of State. Finally, he addressed all the cardinals with a letter that accompanied the gift of his latest book which explains the situation of the Church in China very well, in the hope that at least a rethinking movement could come from them that reaches the Secretariat of State and to the Pope.

Meanwhile, the facts continually confirm the increase in religious persecution against Catholics: just on January 8, a new report by  the U.S. Congressional-Executive Commission on China (CECC) documented that after the China-Holy See agreement of September 2018 "Chinese local authorities have increased the persecution of the Catholic faithful, destroying churches, removing crosses, continuing to arrest the clergy. National Catholic organisations led by the Communist Party have also published a plan to "sinicise" Catholicism in China."

Vatican diplomacy, however, which seems willing to sacrifice the truth in the hope of diplomatic success, is deaf. The gesture of the Chinese woman in St. Peter's Square and the letter from Cardinal Zen to his confreres are the sign of an intolerable situation, which requires maximum attention and solidarity from all Catholics.