A virus between fact and fiction: the ideal thing to suspend civil liberties

A pandemic is the ideal thing that can be used to suspend democracy and civil liberties, often invoked by the same people who are presently removing them. Fictional stories of similar catastrophes teach us that this is so. Planetary emergencies are the ideal thing for those who want to have a world government of “technicians.” Everything started in China, which is a totalitarian regime. 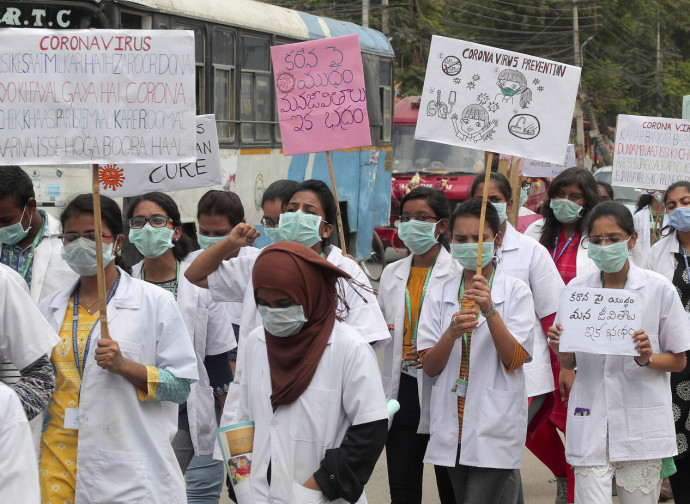 Catastrophes and so-called dystopian novels are closely related, and a post-apocalyptic world is the perfect scenario for futuristic novels. A catastrophe caused by a lethal virus is now even a literary genre in itself. It is needless to recall classic headlines here, because in recent days the newspapers have been full of them. In fact, one subgenre of epidemic literature includes zombies.

That’s right, zombies, because a virus that simply kills everyone does not make for an appealing plot (although it’s true that someone has tried it): at least one person has to survive, otherwise there is no one to tell the story. After all, even in I Am Legend, where there is one person who does not get the disease, there are zombies. As far back as 1901 in Matthew Phipps Shiel’s novel The Purple Cloud, the protagonist wanders alone through a world full of corpses whose deaths were caused by a mysterious cloud that he managed to avoid only because he was at the North Pole. Three-quarters of the way through the book, he meets another survivor, a naked woman. And at this point you might imagine that the story continues as something like The Blue Lagoon. But no, the protagonist is a Victorian gentleman, so he dresses her and, after various ups and downs, he leaves her to her destiny so that he can continue to wander alone.

Why? Who knows, but perhaps this biographical excerpt from Wikipedia will help to give you some idea of the author: “For his fifteenth birthday he was crowned – by a Wesleyan preacher and at the specific request of his father – as the king of the small desert island of Redonda in the Caribbean, with the name King Philip I.” However – strange but true – it is in fact a Christian novel, even though you would never know it, I swear, until the very last line.

It must be said that planetary emergencies are the ideal thing for those who dream of having a world government of “technicians.” There is endless literature on this topic, beginning with Plato. I will only mention the fact that up until the 17th century “utopian” essays and novels abounded: the inventor of the fortunate term “utopia” was a canonised saint and martyr, Thomas More, who when he was Chancellor of the Exchequer did not hesitate to execute some anabaptists. Unlike More, the anabaptists were not joking at all, as was seen in the short but extremely bloody “kingdom” of Münster. But these were still utopias with a religious background.

It was the Jacobins who thought of taking the next definitive step. As the fathers of the nationalisms of the 19th century and the totalitarianisms of the 20th, they had to wrap themselves in shrouds of slogans because they did not have any convenient “emergency” at hand apart from the abused slogan “the fatherland in danger.” If only they had had a coronavirus available, they could have done it sooner and without complaints from the public.

And so we come to today. Everything started in China, which not by chance is a communist dictatorship. Take note: the normal influenza, the one that happens every winter and makes everyone stay in bed, always comes from China. Remember the “Asian flu” of the early 1950s? Well, if the Amazon is a “world heritage site” and they are thinking about placing it under UN supervision, even more so the Wuhan market should “belong to everyone” and thus be subject to international prophylaxis. But this is not happening.

It is well known that there are those who admire the Chinese mixture of capitalism and communism and would like to copy it on a world scale. Well, a pandemic is the ideal situation for suspending democracy and civil liberties, and these same people will also call for a Cupola (a world authority that controls everything without any freedom, like the Mafia). First save our necks. As an example, there is now computerised facial monitoring.

We all cry out against violated privacy, but all it will take is the expansion of the powers of justice just a little, just a bit more “do-goodism” on the part of the courts, politicians, and clergy, and we will see everyone acclaiming the advent of security cameras even in public restrooms. Already in 1848 Juan Donoso Cortés, the deputy and ghost writer of the Syllabus, warned: “The world is moving at a very rapid pace towards the most total despotism it has ever seen.” What he could not have imagined is that it would even be supported by priests, given their growing sympathy for the UN agenda.