A priest from Rwanda: “I’ll tell you about Our Lady of Kibeho”

He lived through the 1994 genocide in Rwanda and survived. Don Jean Claude tells the Daily Compass how his life has changed since his encounter with Our Lady. He tells us how the apparitions and prophecies of the Mother of Kibeho in Africa are not over, but speak to the people and the Church of today: “This is why we must all listen to Our Lady and put into practice what She says”. 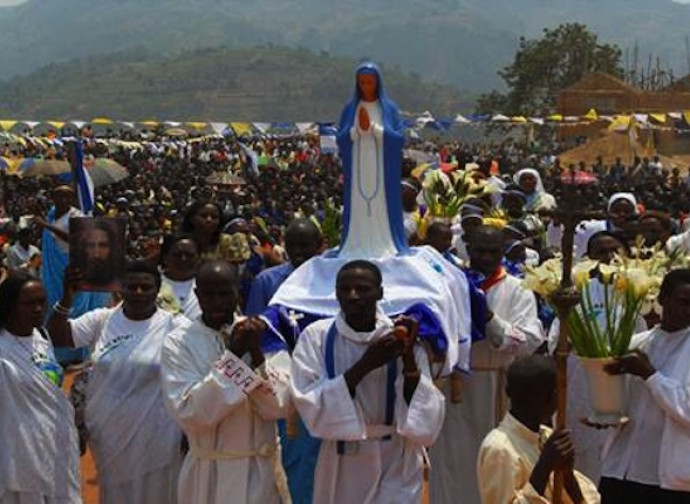 “In those years of horror and terrible suffering, in which I lost my dearest loved ones, I had only one weapon available: prayer to our Mother of Kibeho. On many occasions, which truly seemed to be my last days on this earth, my prayer was only one: “Our Mother Mary, help me! I can testify that Our Lady never failed to help me, never! Not even when hope seemed to be dead”.

Talking to the Daily Compass is Don Jean Claude Mbonimpa, a priest from Musanze, a village in northern Rwanda, where 26 years ago one of the most terrifying events in the history of the 20th Century took place. It was the notorious genocide of 1994, triggered by inter-ethnic hatred between Hutus and Tutsis, during which about one million Rwandans were massacred with machetes, spiked sticks, axes, knives and firearms.

Don Jean Claude, for the past twelve years, was rector of a large Catholic boarding school in his country, Notre Dame de l'Etoile; today he is in Italy, where he came to further his studies at the Theological Faculty of the Triveneto.

There is something absolutely staggering in the life of this priest. And it is not the scandal of the gruesome violence at the heart of this story, but the fact of discovering that there really is a Love capable of embracing human beings in the worst hell and saving them. “My great love and devotion to Mary Mother of God grew immeasurably during the war and the genocide in Rwanda”.

THE MOTHER OF HISTORY

If it is true that in Mary every single soul and the whole world are intertwined in a unique design of love, this is exactly how it was for Jean Claude.

His personal story, pierced by sorrow and healed by God's love, is exactly reflected in that of his people: those who love to follow Mary's footsteps on the path of humanity know, in fact, that Rwanda is a land favoured and visited by She who is Full of Grace.

“Mamà's apparitions in Kibeho began in 1981, I remember them very well even though I was a child and lived on the other side of the country”. She whom Jean Claude tenderly calls Mamà appears on African soil as Nyina wa Jambo, which means Mother of the Word. The supernatural events in Rwanda lasted eight years, from November 28, 1981 to November 28, 1989, during this time Our Lady delivered her messages to three young girls: Nathalie (18), Marie Claire (21) and Alphonsine (16).

One of the most impressive facts of this cycle of Marian apparitions is in a vision that Our Lady showed in sequence to the girls on 15 August 1982. Rivers of blood, fire burning, men killing each other and a huge pit that many people were about to fall in... the girls see all this while Nyina wa Jambo appeared to them deeply sorrowful and weeping.

“At that time, no one could imagine the meaning of those images. Only later would it be discovered that Our Lady had predicted exactly what would happen twelve years later, with the genocide of the Rwandan people”. Jean Claude explains that these prophecies, which came true in time, were a ‘litmus test’ on the truthfulness of the apparitions of Kibeho, which on June 29, 2001 were officially approved by the Church through the Bishop of Gikongoro, Augustin Misago.

Although this is the most striking and well-known fact of these apparitions, in truth Our Lady in Kibeho says much more: “The message that Mamà has given in my country is not only addressed to Rwanda, but to all of humanity. It is a message of love for all Her children, love that continues to this day”.

In a certain sense, one can say that Kibeho's message is still valid; indeed it is extremely topical for mankind and the Church today. In fact, reading Mary's words on the African continent, one is struck by the complete continuity with Her prophecies at Fatima and Medjugorje: the heartfelt and untiring call to conversion of the heart, the coming of terrible trials with extreme peril for souls and the promise of Victory for those who decide to place themselves at Mary's side on God's way, all unite the various apparitions of the Blessed Virgin.

“The world is in a terrible state”, Our Lady told Nathalie, one of the visionaries, on August 15, 1982, “if you do nothing to repent and renounce your sins, woe to you!” And then: “The world is in rebellion against God, too many sins are committed, there is neither love nor peace.... If you do not repent and convert your hearts, you will all fall into an abyss. I want to free you from the abyss so that you do not fall, but you refuse”. Again: “The time will come when you will want to pray, repent and obey, but it will be too late, unless you begin to do it now, repenting and doing all that I expect from you”.

That is not all. In Kibeho Our Lady warns against another very serious danger: the loss of faith and apostasy, not only in the world, but also within the Church itself. And She invites us to pray a great deal for priests, for bishops, for cardinals, and for the whole Church, so that they may always proclaim the true Gospel of God, against the destructive work of Satan who is intent on perverting it.

THE MOTHER OF HOPE

Although the message is really strong and ‘politically incorrect’, we must never forget that Our Lady of Sorrows, as her Shrine in Kibeho is called, is also “Mother of Hope”: “Our Lady appears and speaks the truth because she wants us all to be saved, she wants to take us all to Heaven with Her! That is why we must all listen to Her and put into practice what She says”. Don Jean Claude is convinced of this and he has personally experienced the power of Mary many times, not only during the genocide, but throughout his life, especially since he became a priest of God.

“A few years ago”, he says, “in the Catholic boarding school where I was principal, a girl began to feel very ill. She was sick for several months and everyone was extremely fearful for her life. Despite the many tests and treatments, the doctors could not understand what ailed her, so much so that they began to give up hope of her recovery. Time was running out, so I began to pray a novena begging Our Lady to save this young girl: “Mother, please”, I begged her, “let the doctors find the problem and the cure! On the last day of the novena, while I was reciting the third Luminous Mystery, I received a phone call: the doctors had found the problem and could begin treatment. In a very short time the girl was completely cured”.

At the end of the story, Don Jean Claude's eyes glisten with emotion and joy at the gift of salvation given by God to that girl. For a moment it was as if in that humble priest one could see Mary's loving gaze at all Her children. And we understand that, if we are with her, nothing is lost, but everything contributes to the salvation that God has prepared for us.