A Papal slap. The price of Media Hype

The year 2020 opens with a papal slap on the hand of a pilgrim. The pope apologized, but the episode reveals the truth about his temperament and confirms rumors about his abrupt manners. This makes him more “human,” but relentless media hype has given us a papacy that is more horizontal than vertical. Do we really need this secularization? 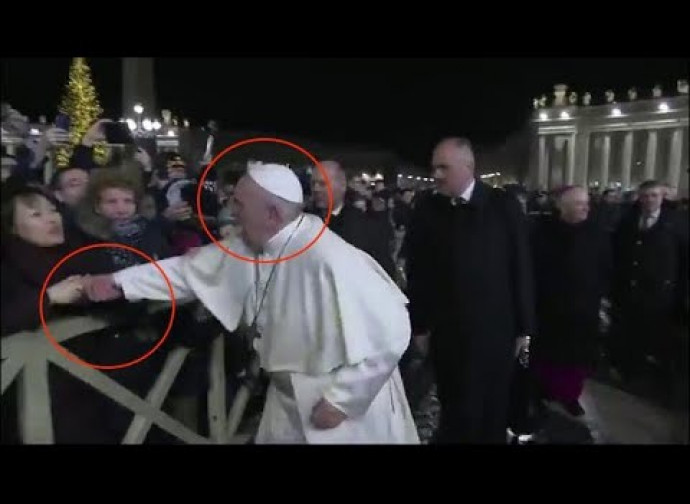 Among all the memes that were being passed around yesterday over the fiasco of the “Papal slap” given to an Asian woman in Saint Peter’s Square, the best was surely the one with a quip written by Mario Brega: “This hand can be either fierce or feathered. Today it was fierce.” Or else one that depicted a stunned Kim Jong-un, ready to start a war, asking, “Who slapped my aunt?”

True, the Pope asked for forgiveness, admitting that now and then he loses patience, and that he did so, curiously, on the very day on which in his homily he said that “violence against women is a profanation of God.” Two opposing whirlwinds were unleashed: those who reproached him with so many of his beautiful words about mercy, and then those who went into ecstasy over his “humanity.” Okay...so we have a pope who gets a little too angry once in a while, and he admits it. Three cheers for sincerity! There should be no scandal, after all popes are people too! And yet...the episode leaves a bitter taste in our mouths, because there was an effort to offset his action by saying that the woman was rude, when in fact she simply wanted to say something to the pope for a moment, not attack him.

Nobody seems to have noticed that, shortly before she reached for the pope, the woman (there was a rumor that she was Chinese and made a request to Bergoglio on behalf of the persecuted Christians of Beijing) was the only one in her group who made the Sign of the Cross. And so we may conclude that her gesture was not that of somebody just wanting to touch a “rock star” but was rather more like that of the woman with the hemorrhage approaching Jesus in the Gospel. On the other hand, when somebody travels 6000 miles in a plane to come to Rome and then finds herself face to face with the Pope, who wouldn’t grab his hand? The point has also been made that security was very poor and was not ready to handle what was happening.

The episode however, just like his apologies, bring into a focus a fundamental characteristic of this pontificate: the excessive physical closeness to people that Bergoglio seeks and has sought out can also turn into a boomerang when the Pope, who is still a man, is not ready to allow others to approach him. It seems to be based on luck and the mood of the pope on a given day: with some people, he takes their Rosary and puts it on his ear. But for others, it does not go so well: they risk being pushed away when they try to kiss his ring or even running into a foul reaction such as the one we witnessed live worldwide. This is just being “human”? Please!

Indeed perhaps even a little too human, to the point that one must ask what good all of this media exposure does for a pope who wants to paint a picture of himself as being close to the people at all costs, when in fact it simply shines a spotlight on the coarsest aspects of his character. There was once a time when jokes about the Pope could be counted on one hand. Today, we are witnessing a wearying social mockery that is about more than just getting a laugh at the pope’s expense. It’s true that it makes the pope more “human,” but perhaps also for this reason it makes him less vertical and less “divine.”

Surely the gesture reveals Bergoglio’s temperament – decisive and brusque in his manners – and it confirms, even though it seems to be banal and insignificant compared to the problems being faced by the Church today, the various rumors and indiscretions about his behaviour with those cardinals and bishops who are not particularly in agreement him or with whom he works in the Curia. The stories that are told describe his temperament as being, shall we say, brusque. But as long as things remain within the privacy of the sacred rooms, such stories can just be passed off as material fit for the appendix of second-tier history books.

The problem is when this comes out into the open on live television: Direct TV has become, for this pope, cramping and asphxyiating. Is it really necessary to show the pope’s public life live as if it was an episode of the Truman Show? Until the early Twentieth Century, most Catholics around the world never even had the privilege of seeing the Pope’s face, even if they knew that he was the one who governed the Church. Today instead it seems that if we do not have the latest tweet from the Successor of Peter, a live broadcast of him, his photo on the news, his latest comment on this or that, that Church has no guide.

The gesture that occurred the other evening is thus the fruit of media hype and of the sympathy effect that was desired to be communicated at all costs with this pontificate, which however in the long run opens the way to all of the small imperfections of our human nature coming through. Certainly, this is not the end of the World, but it contributes to the loss of that attractiveness that a pope should radiate. By insisting on the human face of this pontificate, leaving behind the aura of divine mystery, one risks secularizing the figure of the pope and absorbing the aspects of his humanity that are not suited to his role. This is a price that can be very humanly disappointing.

A question: is there a way to stop and slow down this race to secularize the mystery of a man who is called to carry, more than any other person, the weight of God on this earth?

In The Young Pope by Sorrentino, Pope Pius XIII says to the cardinals who finally listen to his first discourse: “We ought to return to being prohibited, inaccessible, and mysterious. Only thus will we return to being desirable. This is the only way to create great love stories, and I do not want halfway believers, I want great love stories.” And a bit earlier in the story, the same newly-elected Pope Belardo is asked by a marketing expert to authorize the production of a plate with his face on it. He shows her a blank white plate, and he says, “This is the only merchandizing that I can authorize – the one without any picture of me, because I am nobody. Nobody. There is only Christ.” It’s fiction, but who says it can’t work?