A Note condemning do-it-yourself liturgy: but now it must be applied

The Congregation for the Doctrine of the Faith, in its Responsum of August 6, has clarified that arbitrary sacramental forms are invalid, such as “We baptize you in the name of the Father and of the Son and of the Holy Spirit” and that it is necessary to baptize “in an absolute form.” In the attached Doctrinal Note, it recalls that the Sacraments are not subjects of personal taste but are to be administered in fidelity to Christ who instituted them. It is a truly Catholic document that should always be applied 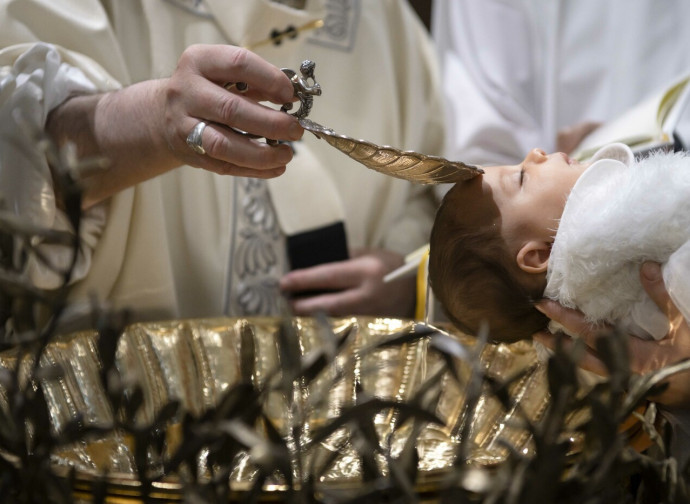 Every so often, in the midst of today’s general asphyxiation, the Lord gives us a few breaths of fresh air, the air of the Holy Spirit that continues to blow in His Church, despite everything. Reading the August 6 Responsum of the Congregation for the Doctrine of the Faith seems like living again in the Catholic Church...

The Congregation was asked about the validity of Baptism administered according to a new formula, which evidently was invented by some minister who can no longer bear “sound doctrine, but out of the itch to hear something” new (2 Tm 4:3) ends up by following his own whims. The formula that was investigated is the following: “We baptize you in the name of the Father and of the Son and of the Holy Spirit.” The CDF responded denying the validity of Baptism administered in this way and affirmed the consequent necessity of (re)baptizing in an “absolute form” [in forma absoluta].

What does this last specification mean? The Church teaches that “Since the sacraments of Baptism, Confirmation, and orders imprint a character, they cannot be repeated” (Can. 845, §1). For this reason, “If after completing a diligent inquiry, a prudent doubt still exists whether the sacraments mentioned in §1 were actually validly conferred, they are to be conferred conditionally.” If it is not possible to prove that a person has in fact been baptized, confirmed, or ordained, or if there are doubts about the (valid) celebration, either regarding the matter, the form, or the intention of the minister or of the adult who receives the sacrament, then the sacrament is to be “newly” administered under condition, or “on the condition that the subject was not already baptized or confirmed or ordained.”

Thus, the fact that the Congregation responds that, in the case presented to it,  Baptism should be conferred in an absolute form, means that there is no doubt about the fact that the form which had been utilized previously is completely invalid. In 2008, under the pontificate of Benedict XVI, the Congregation had already given the same responses to the question of whether Baptism was valid for those who had “received Baptism” with non-Trinitarian formulas, such as: “I baptize you in the name of the Creator, and of the Redeemer (or Liberator), and of the Sanctifier (or Sustainer),” and whether such persons should be baptized in an absolute form.

The Responsum of August 6 is accompanied by an interesting Doctrinal Note, that explains the context of and reasons for the response: “Recently there have been celebrations of the Sacrament of Baptism administered with the words: “In the name of the father and of the mother, of the godfather and of the godmother, of the grandparents, of the family members, of the friends, in the name of the community we baptize you in the name of the Father and of the Son and of the Holy Spirit.” Such is the imagination and disobedience of men. The reasons given for using this “family” formula are based on the desire to “emphasize the communitarian significance of Baptism, in order to express the participation of the family and of those present, and to avoid the idea of the concentration of a sacred power in the priest to the detriment of the parents and the community that the formula in the Rituale Romano might seem to imply.”

The Note denounces the fact that behind these “debatable pastoral motives,” there is hidden “the ancient temptation to substitute for the formula handed down by Tradition other texts judged more suitable.” It refers in fact to the “doing it my way” that for decades now has been invading the world of liturgy, faith, and morality, inevitably ending up by disintegrating the unity of the Church. In a footnote, the document denounces “a subjective deviation and a manipulative will” and indicates the correct way of intending and living the litugy, recalling an incisive text taken from the Romano Guardini’s The Art of Praying: “[the believer] must open himself to a different kind of impulse, which comes from a more powerful source: namely, the heart of the Church which beats through the ages. Here it does not matter what personal tastes are, what wants he may have, or what particular cares occupy his mind....”

Not only may the faithful or the priest impose their own conviction or personal taste in the liturgy and the celebration of the Sacraments, but even the Church herself, “although [she] is constituted by the Holy Spirit, who is the interpreter of the Word of God, and can, to a certain extent, determine the rites which express the sacramental grace offered by Christ, does not establish the very foundations of her existence: the Word of God and the saving acts of Christ.” Because the Church is the Spouse of Christ, not his mistress, and she must be faithful to Christ. “It is therefore understandable that in the course of the centuries the Church has safeguarded the form of the celebration of the Sacraments, above all in those elements to which Scripture attests and that make it possible to recognize with absolute clarity the gesture of Christ in the ritual action of the Church.” The formula of Baptism is one of these elements, and the same must be said about the exclusive ordination of the persons of the male sex or of the indissolubility of the sacrament of matrimony. The Church cannot change them, and therefore she does not want to, out of fidelity to Christ. Recalling the profound unity between the Council of Trent (which evidently is still valid...) and Vatican II, the Note restates that “they do not have the authority to subject the seven sacraments to the action of the Church. The Sacraments, in fact, inasmuch as they were instituted by Jesus Christ, are entrusted to the Church to be preserved by her” – preserved and not distorted.

Another emphasis of great importance: “The Second Vatican Council has likewise established that no one “even if he be a priest, may add, remove, or change anything in the liturgy on his own authority” (SC 22 §3). Modifying on one’s own initiative the celebrative form of a Sacrament does not constitute a simple liturgical abuse, like a transgression of a positive law, but a wound inflicted simultaneously on ecclesial communion and on the recognizability of the action of Christ, which in the most serious cases renders the Sacrament itself invalid, because the nature of the ministerial action requires transmitting what has been received with fidelity (cf. 1 Cor 15, 3).”

Therefore, the Note continues, “In the celebration of the Sacraments [...] the subject is the Church, the Body of Christ together with its Head, that manifests itself in the concrete gathered assembly. Such an assembly therefore acts ministerially – not collegially – because no group can make itself Church [...].The minister is therefore [...] the visible sign that the Sacrament is not subject to an arbitrary action of individuals or of the community, and that it pertains to the Universal Church.” In order to be able to be this sign, it is not enough that the minister is simply present; he must conform himself to the intention of the Church, and such “intention therefore cannot remain only at the interior level, with the risk of subjective distractions, but must be expressed in the exterior action,” and thus this action must be removed from personal arbitrariness, from the sensitivity of a group or one particular historical era. “Moreover, to modify the sacramental formula implies a lack of an understanding of the very nature of the ecclesial ministry that is always at the service of God and his people and not the exercise of a power that goes so far as to manipulate what has been entrusted to the Church in an act that pertains to the Tradition.”

All of this is to be underlined, line by line. However, at this point we need to ask ourselves how it is possible that in seminaries, theological faculties, and cathedrals – to say nothing of parishes and shrines – arbitrariness, subjectivism, and abuses are now the norm. To whatever Church you go, you find a different form of Mass and the Sacraments – something other than recognition of Christ and the communion of the Church.

Is it too much to ask to actually make this Note operational? And not only in the most serious cases, but also in the “mild” ones, which also disfigure the sacramental action of the Church and disintegrate its unity?