A clever way to impose an Amazonian liturgy

The Roman Missal in the Zairean rite is the first one to be enculturated and lends itself to becoming a precursor to a future Amazonian rite. There are two risks in this undertaking: introducing pagan elements and producing a new liturgy inspired by the objectives of Church politics as opposed to the Church’s mission.  On this matter, Benedict XVI warned, "A liturgy is not born by means of decrees." 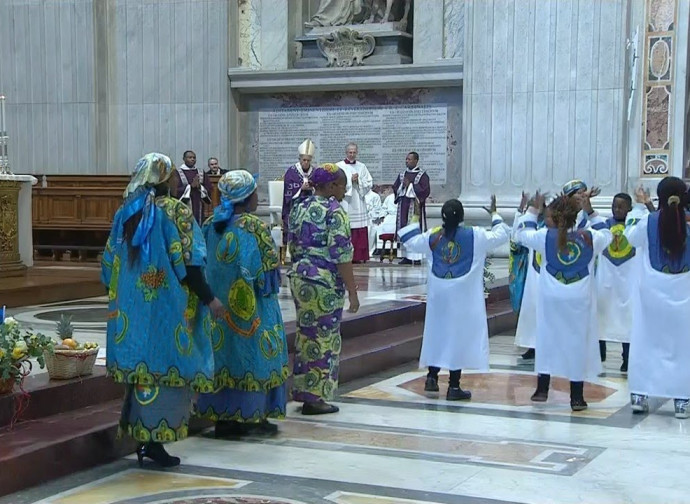 Liturgical enculturation is a major problem. Should we start from native cultures or  the Church's liturgy? Replying "from both" is no answer, it dodgers the question. Only one can be a priority, otherwise we end up having a superficial approach. Moreover, Benedict XVI warned: "A liturgy is not born by means of decrees."

Liturgical enculturation is typically a post-conciliar issue and is now back in the limelight with the issue of the new liturgy in the Zairean rite. The recently published Zairean rite is the first enculturated example of the Roman Missal. Indeed, it is the first enculturated Missal but it certainly won't be the last. In the Missal's preface, Pope Francis announces another future step with an Amazonian rite: "The Zairean rite suggests a promising way forward for the eventual creation of an Amazonian rite." In his papal exhortation Querida Amazonia, in fact, Francis wrote it is necessary to "take up into the liturgy  many elements proper to the experience of indigenous peoples in their contact with nature, and respect native forms of expression in song, dance, rituals, gestures and symbols." (n. 82) Thus, one thing is for sure: the Zairean rite is just the first step in a long-term process of change.

It is easy to understand two grave dangers inherent in such liturgical enculturation. The first regards "to take up into the liturgy many elements proper to the experience of indigenous peoples" means incorporating pagan elements as well. The second danger is that the process of change reeks of a committee working to produce a new liturgy suited to its own ecclesiastical policy goals rather than the Church's mission.

Joseph Ratzinger also dealt with this issue, but he proposed a very different path from the one that now seems to have begun with the Zairean rite and will continue with other rites and eventual liturgies created for each and every culture. In 1977, during an interview appearing in Communio magazine and later republished in his book Das Fest des Glaubens, Ratzinger commented on this precise subject. Even back then, many advocated for liturgical adaptation in terms of the local cultures in mission territories. It was believed that if a liturgy contained expressive forms or prayers of local origin, it could bring those populations closer to the Catholic faith.

Ratzinger, however, said just the opposite: "A liturgy cannot be born by means of decrees, in fact, one of the shortcomings of the post-conciliar liturgical reform undoubtedly is due to the professional zeal of committees that sought in theory that  which necessitates developments in life. Only when and to the extent that a solid Christian identity has been formed in mission countries, can one, on the basis of this identity, cautiously move on to Christianise pre-existing forms, to merge Christian elements with the forms of daily life."

These are fundamentally important observations. If the immediate pastoral intent prevails, then attempts will be made to change the liturgy in order to encounter native populations. The pastoral urgency will make it necessary to act quickly, and therefore involve commissions of experts who will change the liturgy, transforming it into a pastoral instrument, when the real encounter should be between heaven and earth. One cannot help but think of the same process that occurred not in mission lands but here in the lands of ancient Christian faith immediately following the Second Vatican Council. The pattern is the same, with the difference being the pastoral intent was directed toward modern man here and toward indigenous pagan populations elsewhere.

Ratzinger's proposal suggested not abandoning the Roman liturgy even in mission territories and, even so, to proceed with great caution to "Christianise the pre-existing forms" and only when the Catholic identity of those communities was well formed.

The different approaches of Pope Francis and Ratzinger on this specific point should be noted. Francis speaks of "taking up" into the liturgy the many pre-existing elements of local cultures. This approach invites us to bend over and gather what is to be found locally and precisely in the manner we find it. Ratzinger, on the other hand, spoke of "Christianising" pre-existing forms. In Francis's argument, cultural customs enter the liturgy exactly as they are found; in Ratzinger's reasoning, cultural customs are eventually incorporated but only after being transformed by Christian evangelisation. The first position presupposes the idea that they are already in some way Christian, while the second assumes the natural elements of non-Christian cultures need to be purified of the idolatrous and pagan elements found in them.

Returning to reflect today on these problems also means going back in our thoughts to the post-conciliar liturgical reform. Regarding such reform, as Ratzinger said on many occasions, these two visions are to be confronted. That, according to which the liturgy had to come to terms with history, experience, language, the expressiveness of the world and adapt to all this by making it part of it as a good in and of itself. And that according to which, the liturgy could illuminate concrete life in a certain historical context if it could strike with transcendent rays of light, not in order to crush such context, but to illuminate its inner truth and therefore allow it to be reborn.